Weekly Update: Natalie Diaz' When My Brother Was an Aztec and More

50º ~ light grayish skies, a small breeze knocking about in the branches, precursors to fall


Another intense week under the belt of the semester, nearing the snug fit of midterms before we let loose and move to the next notch as we fatten toward finals.

This week, I fulfilled my goal again and read one book, this time a book of poetry.  I will be forever indebted to Traci Brimhall for sending me a copy of Natalie Diaz' When My Brother Was an Aztec (Copper Canyon, 2012).  This is a stout book, weighing in at 102 pages of solid poems, many of them at least a solid page in length, but more often two or three pages.  This is Diaz' first collection and it knocked me out.  She writes of the modern day Native American experience in the southwest, and the book brought out echoes of Sherman Alexie, Joy Harjo, Wendy Rose, Simon Ortiz, and so many others. 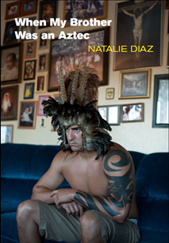 In the collection, the speaker traverses the dangerous territory of not only being a minority but also being a minority on the rez.  Her brother has succumbed to a meth addiction, after serving in Iraq, and his addiction tears the family apart. And while the brother haunts the entire book, Diaz does not allow that to become the sole focus.  Her speaker lives a full life as sister, daughter, woman, and lover.  Woven throughout the poems are both tribal traditions and references to Western figures.

This may end up being my favorite book from 2012, as I've dog-eared so many pages, the top corner of the book bulges. Here's just a taste of what Diaz has to offer from "Abecedarian Requiring Further Examination of Anglikan Seraphym Subjugation of a Wild Indian Rezervation."

Angels don't come to the reservation.
Bats, maybe, or owls, boxy mottled things.
Coyotes, too.  They all mean the same thing--
death.  And death
eats angels, I guess, because I haven't seen an angel
fly through this valley ever.
Gabriel?  Never heard of him.  Know a guy named Gabe though--

As anyone who has ever tried to write one knows, pulling off an abecedarian with lines that flow smoothly the one into the other without calling undue attention to the form is hard to do.  Diaz knocks it out of the park.  The rest of the collection is expertly crafted and the lines sing, all the time drilling straight down into the heart, the meat of the matter.

In more poetry news, last night I drove up to Fayetteville to attend one of Matt Henriksen's Burning Chair Readings.  This one featured Johnathon Williams, Jessica Baran, Keith Newton, and Adam Clay.  Adam and I were at the U of A together, and it was wonderful to be able to hear him read in that magical city again.  I loved Adam's first book, The Wash, and have been eagerly waiting for his second book, The Hotel Lobby at the Edge of the World, out this year from Milkweed.  Also, Johnathon is slated to come down to PTC in April for the Big Rock Reading Series to read from his book, The Road to Happiness, so the trip doubled as a chance to get a preview of what's to come.  Can't wait to hear him read again.

This coming week is going to be slammed, and I've got three night time literary events on the calendar!  Oh me, oh my, oh!  Tuesday night is the launch party for Escape Velocity, a collection of Charles Portis writings edited by Little Rock's own Jay Jennings, and Thursday night is the awards ceremony for Arkansas' two major literary awards the Porter Prize and the Booker Worthen Prize.  Finally, on Friday night UALR's literary magazine, Equinox, holds their launch party.  Whew.  I'm going to try to make as many of these as I can, but make no promises, given the burgeoning to-do list at PTC.

In the meantime, the work of reading submissions has begun at Heron Tree, adding a whole new texture to my poetry life.  These are busy days, but I couldn't be happier!
Posted by Sandy Longhorn at 12:10 PM

Thanks for the book recommendation. It looks interesting.

Let me know what you think, if/when you check it out.

Unknown, let me know what you think!