44º ~ a quick snap in the air these past two mornings, bright sun, calm winds, and dry, highs mid-60s


First and foremost, as a weather bug, I'm sending all my sympathies to those who have felt the winds and rains and surge and snows of Sandy.  I heard on The Weather Channel last night that in 1821 another hurricane made landfall over New Jersey/New York and caused much the same destruction, albeit to a much smaller population.  I know that it is easy to feel like the forecasters are over-promoting worst case scenarios in the days leading up to events such as this, but I am so thankful they are there, saving as many lives as they can.  Coming from tornado territory, where there might only be a moment's notice and a small portion of geography assaulted, I'm thankful there is so much lead time on hurricanes, even as I'm saddened by the huge path of destruction.

It's a good time to give to the Red Cross if you've got anything left to give.

On a brighter note, yesterday's mail brought my signed copy of good poet-friend Al Maginnes' new book Inventing Constellations (Cherry Grove, 2012).  I was lucky to this book in manuscript form awhile back and let me tell you, it's wonderful.  Al and I share several similarities.  We are both graduates of the MFA program at the University of Arkansas (although several years apart) and we both write poems that may seem at first to be "quiet" or "muted," but that lend themselves to longer, deeper readings.  In contrast, Al is a fan of the longer poem.  He has the strength to sustain his speaker and the situation of the poem over many lines and often over multiple pages.  This is the type of poetry that invites introspection and reflection; no flash in the pan here.

At the heart of Inventing Constellations is a speaker, close to Al himself, entering fatherhood in late middle-age and confronting all the issues of parenthood alongside his own mortality.  Amidst those poems of fatherhood are poems of science and music, poems of politics and existentialism.  These are poems that observe the world in minute detail and draw on larger truths through the minutia of daily life.

I've become fond of listing titles in these mini-responses, and here are few from Al.

The opening poem in the collection, "The Definitions," is a collection of prose segments exploring the nature of family and announcing that the speaker has become a father through adoption, which adds yet another layer to the woven fabric of parenthood presented in the book.  Here is one of my favorite excerpts.

A family is a boomtown, the only nest of light for miles, its laws
evolving with each new development.  Shifts work around the clock
saloons never close and the streets fill with stories that mean
nothing to anyone who doesn't live here.

And here is the beginning of "Parenthood as Bad Theology."

I am becoming the sermon I promised
..........I would never deliver, a sackclothed shadow,

caricature wielding the finger of admonition.
..........Smoky entreaties, curly wisps of logic
no cartographer could unwind...

Finally, all thanks to Helen Vitoria for the good work she is doing over at Thrush.  In the November issue, you'll find one of the earliest sickly speaker poems, "You Taught Me Devastation." For those of you interested in the drafting process, here's a link to the day I set down the first draft. (RIP, Lou-Lou, my little muse-kitty.)  The beginning is quite different from where the poem ended up, but that's the work of drafting.  The whole drafting process is so mysterious.  Here are two scans of my journal from the day this poem began.  (Thank the stars for revision!) 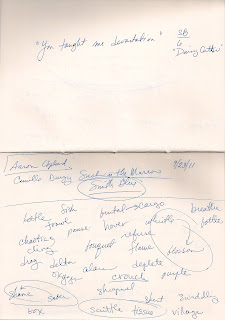 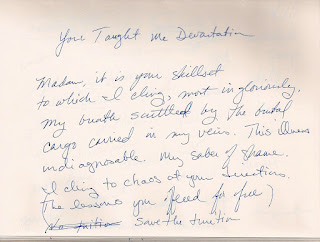 Posted by Sandy Longhorn at 9:19 AM

You've wooed me--and won! "Parenthood as Bad Theology" is just too wonderful. And the other titles of poems (and the whole book title!) sound great too. I've added his volume to my ever-growing list. Thanks for the recommendation!

Kristin, thanks for reading. Let me know what you think of the book.