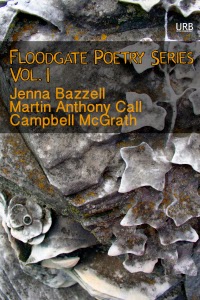 All together Volume I of the Floodgate Poetry Series does not disappoint. It offers all of the advantages of the chapbook with the added spark of three voices placed side by side, so that the poems of one poet linger and influence the reading of the next.
Posted by Sandy Longhorn at 10:23 AM 1 comment:

45º ~ a distinct chill in the air, bright/brilliant slanting sun, autumn in Arkansas


As always, the semester presents its marathon challenges, and then, I look up, and notice we're 3/4 of the way through. This year, that means, I'm about to go to Iowa for a reading. Wahooooooza!

In true weather fashion, an "arctic blast" plans on blowing through while I'm up home. Highs should be right in that comfort zone of the low 30s, and, oh yes, there's a chance of snow at some point. Uhm, yum? Still, central Arkansas will be only slightly warmer, albeit without the snow chances.

I guess I'll be taking my winter coat along and reading some "cold" poems. If you live in or near Des Moines, I hope to see you there!

Can't wait to visit with all the Drake writers and see my MFA buddies, Amy Letter & Brian Spears!
Posted by Sandy Longhorn at 7:59 AM 2 comments: