42º ~ our lows are dipping down into the low 30's, the rain has gone, the world looks the brighter for the cold, but no less green, brisk winds, the little heater put to use

Dear Reader, I cannot believe we've reached another Friday so quickly.  Time speeds up this time of year as the semester spins nearly out of control with less than a month to go before finals.  I've got 80 or so papers to grade; nonetheless, I went to bed last night reciting this: "tomorrow I will write a new draft, tomorrow I will write a new draft."  While I wasn't as lucky as last week, I did get something new on the page.

First, I went back to an older draft, "Requiem for the Girl with Sparrow Wings for a Heart."  This was a poem I drafted back in June.  I love the title, but the poem wasn't holding up with age.  It was too stark, too literal-minded.  As I sat down to write this morning, I glanced at that old draft and saw that I could keep the first stanza and the last, but the stuff in the middle had to go.  Yup, I deleted four and a half stanzas and rewrote the guts of the poem.  For now, it seems to be singing a smoother song with a bit more magic, a bit more lyricism.  Time will tell if this revision will stand.

Next, I was ready for something new.  I started by jotting down a few lines from Big Tent Poetry's weekly prompt.  I shared this on Monday.  Participants left a single line in the comment field for someone else to use in a poem or story.  I found three or four lines that seemed to spark and copied them into my journal.  Alas, Dear Reader, nothing doing.  I tried a few on for size.  I mixed and matched and eked out some new additions.  Nothing coalesced.

Then, I went for my folder of inspiration cards.  This one grabbed hold of me, and the lines on the card worked their magic, with a few of the images thrown in. 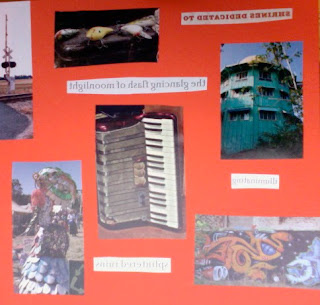 This image is in reverse b/c I used my computer's camera to take the picture.  The words say, "Shrines dedicated to...the glancing flash of moonlight...illuminating...splintered ruins."  The fishing lures and the statue's umbrella made their way into the poem as well.    The lines on the card do not begin the poem, and I amended them a bit for rhythm and line length.  Still, the lines were the spark and I built a speaker around them.  For some reason, I'm fixated on romantic relationships again this week, and the draft is titled, "The Wife Who Wanders Explains Her Actions."  While I don't often draw directly from my life with C., there's a bit of it in this poem.  The wife in the poem is a worrier and so am I.  I had to explain to C. that worrying about him was my right, and the wife in the poem does some of this same explaining.

Who knows if she and this draft will survive, but for now, I can begin my grading marathon of the weekend feeling good that I persevered and drafted!
Posted by Sandy Longhorn at 9:05 AM

It's wonderful to read about your drafting process. I make poems out of collages, too!

Thanks, Kathleen. The collage poem has become a favorite of mine in the last few months. Glad to know you're doing it too.

I've never tried to make a poem from a collage although I like to put fragments together (just talked about that on my blog recently too!) Might have to try this :)

Good luck, Jessie, and thanks for stopping by.