Before I get to today's process notes, I'd like to acknowledge the disaster that struck western Arkansas early Friday morning, when a flash flood wiped out Camp Albert Pike, which can hold as many as 300 campers.  So far, 16 are confirmed dead, but that number may continue to rise today as more search and rescue teams deploy in the remote, mountainous and heavily-forested area.  If you pray or not, I hope you'll take a moment of silence or two for the families and individuals who died there. 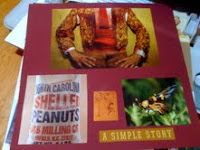 Today is the sixth day of my write-a-thon project, and I was so worried it would be another tooth-pulling day like yesterday.  However, I sat down to the desk with determination.  I switched up the music I'd been listening to and selected Yo-Yo Ma's Bach: The Cello Suites.  I sipped my coffee and thought of how to begin.  Without too much waste of time I reached for my inspiration cards and selected one, pictured here.

The yellowjacket in the bottom right jumped out at me, along with the caption.  As I began writing about the yellowjacket and it's "simpler story than ours," I wanted to refresh my memory about the species.  I clicked on Wikipedia (yes, yes, I know it's not a solid source, but it's fast and easy to understand...I always confirm the details later.)  As soon as I saw that the genus name was Vespula, I felt a surge.  Two things struck me:  One, a good friend has recently acquired a Vespa and I wondered if the name came from the name for wasps?  Probably not, but I like the association.  Two, that friend has had problems with arthritis in the hips and back...This led me to think about a friend I knew a long time ago, with whom I've lost touch, sadly.  This woman was older than me, a mother figure, and diagnosed with MS while I knew her.  At the time, I also happened to see a television clip about people who used bee venom to alleviate the symptoms of MS, arthritis, and other debilitating diseases.  I have no idea if it really works, but it all came together in today's poem "Vespula Cures."  A few lines I like so far:  "Old wives and snake oil / salesman agree.  They give the capture nets / away for free but sell the secret for a hefty fee."  Maybe too sing-songy.  Time will tell.
Posted by Sandy Longhorn at 10:10 AM

I use Wikipedia quite often for a brain boost or inspiration. You'd be surprised how often it is right. Some really serious people editing/checking that stuff.

Wow, Tyler, that was a fast comment. Thanks for stopping by!

Beautiful! Thank you for sharing your inspiration and process.

Aw, Amy, thanks for the kind words!