For those keeping score, I started the week off well, keeping up my 2 hours in the morning.  I've slowly inched the alarm clock back a bit each week, so that I'm able to be at the desk before I'm needed on campus.  C. has been amazing at accommodating this new shift in the schedule.  (Another thankfulness: a spouse who understands the writing life.)  The urge to write new poems is creeping along in my veins nicely.  I may even have stumbled across a new obsession as I drafted a poem Tuesday morning.  I don't want to say anything more about it yet, lest I scare it away.

I will say that what prompted me to the draft was reading Joe Hall's Pigafetta Is My Wife (Black Ocean, 2010).  Based on the recommendation of a dear poet-friend, I picked up this book over a year ago, but just got to it.  This poet-friend raved about the book and how much it had changed her writing life.  While I found a lot to admire in the book, I was sad that it didn't have quite the same powerful effect on me.  Hall's book is a loosely crafted braid, part historical poems from the voice of Pigafetta, Magellan's chronicler and one of only 18 sailors who survived the trip, and part contemporary love letter.

I confess that I loved the historical poems exposing colonization the most and had trouble shifting gears from time to time, although I think this is more my failing than any misstep on the part of Hall.  The poems are filled with images ripe and succulent, images that are strung together in a fragmented syntax that conveys just how difficult it is for the speaker to put into words his struggle.

In one section of the long poem "Knife & Mirror," Hall writes:

On one island, the Captain gave the gift of chains
More often, he preferred the rough equivalent
knives & mirrors

jumping back from their own startled expressions--
artillery shaking the coast

After I'd read the book through, I went back and collected words for a rough word bank in my journal, my poor lonely journal left untended for so long.  Very quickly the words began suggesting lines to me and arrows/circles soon linked groupings all over the page.  It felt great to shift to drafting full lines and eventually to what became something that resembles a full poem.  For that, I am indebted to Hall.

All week, I've also been reading from Emily Dickinson: Selected Letters (Belknap Press, Harvard U P, 1986).  I've had this book for ages but no longer remember if it was once assigned in undergrad or in  a grad school class or if I picked it up on my own.  In the past, I read mostly from the letters to T. W. Higginson and of course, I've combed over the three master letters endlessly.  Now, though, I feel compelled to read from the beginning.

The first few letters come from a young E.D., just 12 years old, and I couldn't quite turn off my composition instructor brain as I read run-on after run-on after run-on.  Already in the poems, I see the woman and poet Dickinson would become, obsessed with nature, struggling with a body prone to ailments, and questioning the strict religious society that surrounded her.  What was more surprising was to read the hints of loneliness, low self-esteem, and social doubt.  In my mind, she is a giant and her poems so self-assured & steady (even when questioning), it is sad to realize that she felt many of the same things I felt at that age and still feel today more than I'd care to admit.

Finally, I did some collage work yesterday and here is one of the results. It might be a little hard to tell, but I've moved into a 3-D phase, raising some images off the page with "risers" made out of old mat board. 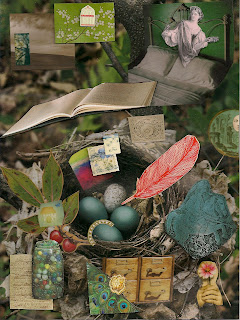 I love your collages, which comfort and calm me. Oh, Emily! Your collages would comfort her, too, I bet.

Aw, thanks, Kathleen! You are so sweet.

Hi Sandy,
I am impressed (and inspired!) by your new writing regiment. Your collages are things of beauty, too.

Thanks, Martha! I'm sad that I can't blog more during the week, but that's the way it goes.