50º ~ the autumnal blusters are upon us, complete with gray hovering skies 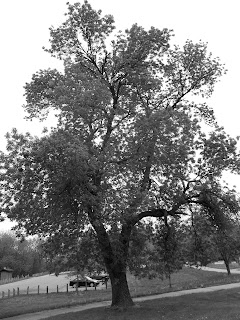 The story of today's draft is convoluted.  Wednesday night, I fought the insomnia beast at 2 a.m. and my mind went wandering to my sickly speaker.  Caught in the lethargy of exhaustion, I failed to get out of bed and write down what was happening, but I remembered it well enough Thursday and had it at the back of my mind this morning.

What happened in the night was this.  The speaker started talking about how "the woman [she] called mother by mistake" came to visit her.  The poem spun out from there.  As I was getting ready to write this morning, I started with that, but something about the situation kept bugging me.  Finally, I pulled out the draft from last week and took a look.  Sure enough, there was a kind of separation in that draft and a sense that this woman would not be visiting, even though she is the person who admitted the speaker to this hospital/asylum.  There is also a sense that the doctors (whitecoats in the speaker's language) want to get blood from the woman in the mistaken sense that she and the speaker are related.  The speaker feels a need to protect her, this pseudo-mother.

So, I scratched that beginning and started over with the idea of the pseudo-mother, for lack of a better title, sending anonymous gifts to the sickly speaker, anonymous to remain hidden from the whitecoats.  What struck me about all of this is that writing a series of linked poems like this means I have to take some elements of fiction into account in terms of plot and character if I want them to hold together as a whole, and I think I do.

More and more, the speaker wants an audience, and some of the earlier poems take the epistolary form to solve this.  Today, I needed for her to be able to tell someone about these gifts, so she writes a letter to "Dear Madame," her mentor, which is where the whole series began back in August.  Today's draft begins:

Be on your guard.  There are secrets here
which I will seal with glue & string.

The woman I called mother by mistake
sends me gifts addressed by an anonymous hand.

As for the process of the draft, after I scratched out the false start, I did turn back to Lucie Brock-Broido for some word gathering.  However, I've switched to Trouble in Mind.  I didn't need to gather as many words this time, but I did still go through and look for a title. The phrase "We live in black & white" comes from her poem "Physicism."  This worked for the draft given the correspondence by letters and the fact that one of the gifts the speaker receives is a series of photos, and while they aren't mentioned to be black & white photos in the poem, they could be.